Create an Account - Increase your productivity, customize your experience, and engage in information you care about.

The membership of the Washington Association of County Officials (WACO) includes elected county assessors, auditors, clerks, coroners and medical examiners, prosecuting attorneys, sheriffs, treasurers and comparable appointed officials in charter counties. WACO is a non-profit, nonpartisan organization. WACO works closely with the affiliate organizations for every executive level county official in Washington's 39 counties. These affiliate associations meet throughout the year, bringing colleagues together to discuss issues of common interest and to exchange ideas and opinions.

The organization began its early stages of development in 1954 with all elected officials in Washington State extended an invitation to join through their respective associations.

By January of 1955, legislation was introduced to add the Washington State Association of Elected County Officials in statute. The bill did not pass. Determined county officials continued their efforts for 4 more years and ultimately won passage of the legislation in 1959.

WACO commenced operation on March 1, 1960, with offices in Olympia. 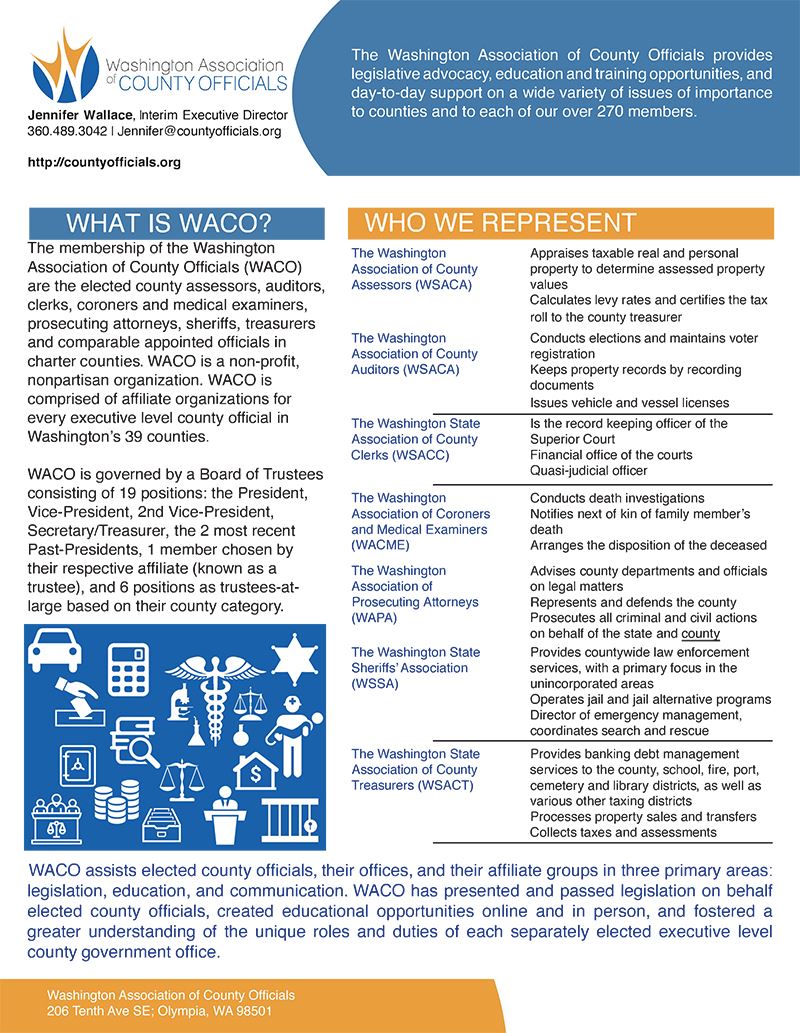 Download the one-page PDF file, "What is WACO" now!

An 19-member Board of Trustees made up of county officials from throughout the state determines WACO policy. Representatives on the board are chosen by county size and affiliate group. Officers and trustees are elected at the annual WACO Conference and meet 4 to 5 times a year. WACO has a full-time staff near the capitol campus in Olympia, serving the nearly 270 members in the organization.

WACO's responsibilities are as follows:

You can find a more in-depth look at WACO's services on our WACO Services Handout (PDF).